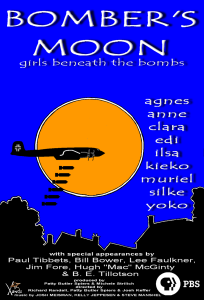 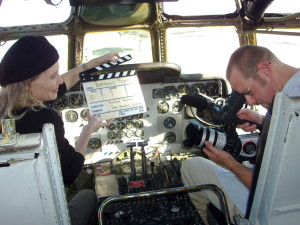 Patty,
Just a short note to let you know that last evening I sat down and watched Bomber’s Moon for the second time. You and your photographer did a terrific job! Congratulations! What a perspective. And from a British, German and Japanese point of experience. Wow. Thank you for sharing this work with me; I’ll keep it in a special spot with some of my other military history video’s.
My Dad was a transport and fighter pilot in WWII. But, in the Korean War he was a B29 pilot, and later flew B47’s and B52’s. One thing that really bothered him his entire life was the incendiary bombing missions he flew over North Korea. He privately wondered whether the Good Lord would allow him into eternity because of the folks on the ground he knew he killed on those bombing missions. Of course, I did not know this until Dad shared this with me when I myself returned from war. He also flew bombing mission over South and North Vietnam in support of ground guys like me.
The “Bomber’s Moon” stories of innocent civilian women in the line of fire, on the ground, are incomprehensible to most folks today…as are the stories of the young pilots who flew the missions, and have had to live a life time thinking about the human misery their mission caused on the ground. It is quite an emotion packed piece of work you have created in capturing this history, I learned a long time ago that there is nothing glamorous about any war.
Ted Severn